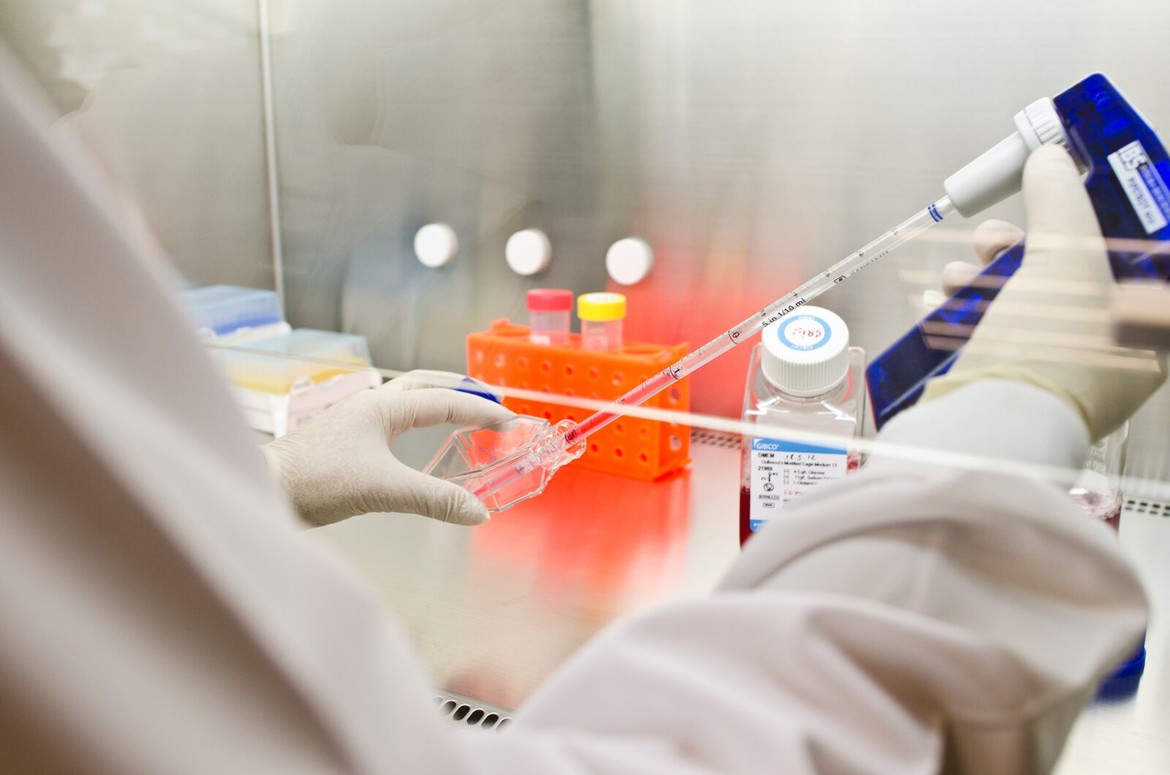 Uveal melanoma (UM) is the most common ocular cancer in adults. Arising from melanocytes within the choroid layer in the uveal tract of the eye in nearly 90% of cases, UM may be driven by a variety of risk factors. These may include mutations — i.e. changes in the DNA sequence — of specific genes (including the BAP1, GNAQ and GNA11, EIF1AX and SF3B1 gene mutations, all of which we will elaborate on below), resulting in different classes of UM tumours with different molecular subtypes and, consequently, different prognoses and metastatic rates, or many other molecular changes that will modulate the cellular and physiological landscape of melanocytes and contribute to the development of oncogenic abnormalities.

Hence, according to their gene expression profiles (that is, the entire set of genes being expressed or “read”), UM cases can be divided in distinct molecular classes, each with a different prognosis: class 1 tumours with a generally good prognosis and low to medium metastatic risk — 2% for class 1A and 21% for class 1B tumours — and class 2 tumours with a much poorer prognosis and higher — 70-80% — risk of developing metastases.

One of the most common mutations driving UM occurs in the gene coding for the BRCA1-associated protein (BAP1). The BAP1 gene is mutated in almost 50% of all UM cases and associated with high risk class 2 tumours; this gene is also located on chromosome 3, loss of which therefore correlates with poor prognosis and high metastatic risk.

BAP1 is a peculiar gene, as it is considered a tumour suppressor gene — a gene that instructs cells against overly multiplying and keeps them from becoming cancerous. This means that whenever BAP1, or any other tumour suppressor gene, is mutated, cells will become at risk of transformation (i.e. of giving rise to cancer). The BAP1 protein does this by binding to the BRCA1 protein, but also by modulating the very structure of the protein-DNA mesh that makes up chromosomes, also known as chromatin, through a process called deubiquitination (whereby a small molecule called ubiquitin is removed from specific proteins and other molecules, thus changing their activity, signaling them towards a different part of the cell, or targeting them for — or keeping them from — destruction by the cell’s protein degrading machinery). The BAP1 protein also functions as a molecular padlock, as it silences target genes by binding to their DNA and keeping them from being expressed (blocking the molecular process known as transcription — through which DNA is “read” and transcribed into an intermediate molecule known as messenger RNA, before being translated into a protein — thus acting as a transcriptional repressor).

The GNAQ and GNA11 mutations

Unlike BAP1, the set of mutations known as GNAQ and GNA11 are not associated with either of the two separate molecular classes of UM tumours. These mutations are not known to be of prognostic value either, as they prevail equally in both metastatic and nonmetastatic cases, thus having no correlation with patient outcome. They were, however, the first driver mutations identified in UM.

The GNAQ and GNA11 genes code for guanine nucleotide-binding proteins, or G proteins, which function as molecular switches by conveying an immensity of signals from the outside to the inside of cells. G proteins bind and hydrolyse guanosine triphosphate (GTP) into guanosine diphosphate (GDP) — that is, they release small amounts of stored energy by breaking certain chemical bonds and converting GTP into GDP — a molecular transition essential for the signaling mechanisms G proteins are part of and for these proteins, either GNAQ or GNA11, to return to their inactive state. Both mutations in the GNAQ and GNA11 genes associated with UM result in these G proteins being kept in an active state. This leads to an increased activity of downstream signaling pathways — sets upon sets of intracellular molecular messaging systems — known to promote tumour cell growth and modulate programmed cell death (also known as apoptosis, an intricate and highly regulated molecular program of cellular suicide necessary for keeping tissues healthy by eliminating unwanted cells, such as those that display the potential to become cancerous).

Close to 85% of all UM tumours carry a mutation in either the GNAQ and GNA11 gene, and these mutations are mutually exclusive (which means that only one or the other occurs, but never both in the same cell). Being an early/initiating event (that is, occurring early on in UM development), the ultimate impact of the GNAQ and GNA11 gene mutations lies in the altered gene expression programs — the set of genes expressed by a cell, coordinating cellular activity and fate — that lead to tumour growth and proliferation, suggesting that these mutations help setting the molecular and cellular scene for UM advance.

The EIF1AX gene, located at chromosome Xp22 (which means at position 22 on the short arm — “p” stands for petit, or small — of chromosome X; “q” would stand for the long arm of the chromosome), was initially identified as a UM oncogene through a technology known as exome sequencing, where only the subsets of DNA that encode proteins — called exons — are sequenced. Typically mutually exclusive with mutations in the BAP1 gene, EIF1AX mutations are present in 15-20% of UM tumours, tend to occur in nonmetastatic cases and, as such, are associated with better prognosis class 1A tumours. The EIF1AX gene encodes a translation initiation factor: a protein involved in converting the information contained in mRNA molecules into the amino-acid sequences that make up proteins.

A bit more upstream than the EIF1AX mutation in the “DNA to RNA to Protein” two-step process, mutations in the SF3B1 and SRSF2 genes — which encode splicing factors — cause problems at the level of the biochemical mechanism called splicing. Mutations in the SF3B1 gene, especially, are present in 10-20% of UM tumours and correlate with class 1B, or medium risk, cases.

As splicing factors (proteins involved in the biochemical process known as splicing, whereby introns — sequences of DNA that do not code for proteins — are removed from mRNA molecules, leaving only the protein-coding exons in the mature, spliced mRNA, in the same methodical way a film editor cuts out irrelevant pieces of film while leaving only the connected segments that will go into the final cut movie; additionally, the process whereby the same gene produces different proteins through different exon combinations in the mature mRNA is called alternative splicing), SF3B1 and SRSF2 proteins operate within extremely complex and large molecular machines known as spliceosomes. In these, splicing takes place inside the cell nucleus of eukaryotic cells (cells such as all of ours, where most genetic information is kept inside a nucleus segregated from the rest of the cell by a dedicated membrane). In recent years, many chemical compounds have been identified as having anti-tumour activity through interference with the spliceosome. In the specific case of UM, the SF3B1 and SRSF2 gene mutations are the culprits.

As mentioned above, the DNA that composes our genes is “read” and transcribed within the protein-DNA mesh called chromatin, of which our chromosomes are built, and that can be found inside the nucleus of our cells. The expression of these genes may regulated at many levels. These may include regulating the way the gene expression machinery reads and interprets genes by modulating the several molecular steps prior to transcription, and thus allowing — or not allowing — the molecular machinery that reads genes to do so. Another way that cells use to regulate their gene expression, though, does not rely on switching the molecular machinery that’s responsible for transcription on and off, but on changing the very conformation of chromatin and thus making it harder for genes to be read, as they become less accessible to the molecules that would do so.

These mechanisms that change the expression of genes, but that do not depend on changes to the actual sequence of DNA that composes them, are called epigenetic (from the Greek prefix epi, which means "on top of," signifying an addition to the classical or traditional way genetic information was considered to be carried onward from one cell to its descendants), and the way they accomplish this molecular feat lies in great part in adjusting the interaction between DNA and the small proteins called histones, which, together with DNA, make up chromatin.

The most studied epigenetic mechanisms that impact on gene expression — that is, that may increase or decrease the expression of target genes — include DNA methylation (by addition of a very small molecule, called a methyl group, to DNA) and histone modifications (such as histone methylation, acetylation or phosphorylation, involving, respectively, the addition of methyl, acetyl or phosphate groups to histone molecules), a regulatory system that relies on gene accessibility and the malleable interaction between DNA and its surrounding molecules.

Epigenetic regulation may also involve small RNA molecules (nucleic acids similar to DNA, but usually single-stranded, whereas DNA is double-stranded). Contrary to messenger RNA — which merely serves as an intermediate molecular message between genes and proteins — small RNAs have catalytic activity, in that they can facilitate and increase the rate of a biochemical reaction; in the context of epigenetic regulation of gene expression, it usually involves modulating the translation of messenger RNA into protein — thus impacting on the final step of gene expression — or again changing the architecture of chromatin.

All of these mechanisms have been shown to be involved in UM pathogenesis, from a special class of small RNA molecules called microRNAs — some of which have been found to differentiate class 1 from class 2 UM tumours, or to be strongly associated with liver metastases in UM — to the abnormal addition of methyl groups to tumor suppressor genes (known as hypermethylation, resulting in their inactivation and subsequent tumour proliferation). Investigating these mechanisms represents a frontier in UM research, and one that will undoubtedly result in improved therapies and better outcomes, as new drugs capable of manipulating specific epigenetic pathways are developed.